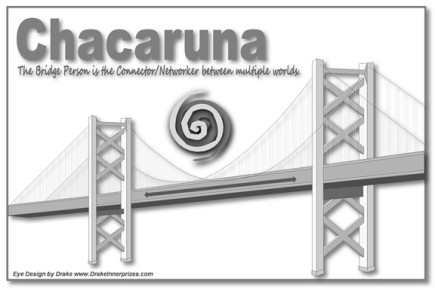 WHAT IS GENDER SHAMANISM?
A very close teacher and friend of mine, who is a pioneer in erotic spiritual work with gay males, once dubbed me a “gender shaman”. Great, I really liked that term of honor but what did it mean? And did it really apply to me? I had never heard anyone else talk about gender shamanism. Yes, there is a person who calls himself the “sexual shaman” but I’ve never heard of any gender shamans. It’s taken me a couple of years and a lot of speaking about gender journeys to finally step into what I think that means.

To begin, let’s look at the basic definitions of gender and shamanism separately, then we will move into the syncretized definition of gender shamanism.

GENDER
The on-line dictionary defines “gender” as “the socially constructed roles and behaviors that a society typically associates with males and females”. Volumes have been written about what gender is including my own book, Soul Sex, which focuses on the concepts of gender fluidity. Our consciousness about gender is moving away from the old binary system of only two options, male and female, into a recognition that there are many gender identities.

Kate Bornstein, in My Gender Workbook, says in jest that there exists only one gender – yours. But another quote from her book by t@whateversusan says, “gender is neither a binary nor a spectrum but an entire galaxy full of stars.” I will go deeper into the wide array of gender identities in the gender shamanism section below.

SHAMANISM
The word “shaman” originated from the Siberian word “saman”, meaning “one who knows” or “seer”. The word “shaman” spread from the Russians to the Americas via anthropologists. The word “shaman” is often substituted or is considered synonymous with medicine person, witch, wizard, sorcerer, magician, seer, sage, healer, herbalist, dream interpreter, priest/priestess, and/or spiritual adviser.

Shamanism is a healing practice that has been in existence for at least 10,000 years and perhaps as far back as 50,000 years ago. Shamanism is not a religion and does not have dogma. Shamanic healing is a form of energy and/or spiritual healing.

A great book to read about basic shamanism is The Hollow Bone by Colleen Deatsman. She says, “The role of shaman can encompass a wide range of services and duties, which, vary from shaman to shaman and culture to culture.”

The following characteristics are present in all shamanic cultures:

1. Journeying to other dimensions to retrieve a solution or lost soul parts for dis-ease, injuries, and trauma.

2. Extracting spirit intrusions that have entered or been sent into the body and are causing dis-ease or accidents.

GENDER SHAMANISM
“He [a wintke, berdache, two spirit] told me that if nature puts a burden on a man by making him different, it also gives him a power.” This quote is from a Lakota man named John Lame Deer. Two Spirit is the modern term for dual-sexed or third gender individuals that were treated as sacred by over 155 North American indigenous tribes. The third gender is comprised of individuals that have a gender identity that is neither male nor female or both male and female. Two Spirits have the following characteristics:

Unfortunately, the introduction of Christianity by missionaries and the influx of white settlers virtually destroyed the acceptance of Two Spirits in North American native life. However, the existence of third gender individuals occurs in many cultures all over the world, from ancient times to modern times, including: the Arctic, Borneo, Burma, Canaan, the Cook Islands, ancient Greece, Hawai’i, India, Italy, Latin and South America, Mesopotamia, Mexico, the Middle East, New Zealand, Pakistan, the Philippines, Phoenicia, ancient Rome, Samoa, Siberia, Sumer, ancient Syria, Thailand, and Tonga.

The Dagara tribe of West Africa believe that gender is energetic and sexuality is spiritually based. Individuals with alternative gender and sexual identities have a specific spiritual role because with the ability to stand between the world of male and female, they experience a state of vibrational consciousness which allows them to stand between this world and the spirit world. This place between the worlds is called the gates and these individuals are the guardians of the gates.

One of the requirements of medicine people and shamans is that they have the ability to walk between many worlds. In Siberia, shamans–to–be must spend time living in both genders. This includes dressing as a member of the “opposite” birth assigned sex. Many shamans adopt these androgynous roles for the rest of their lives. Consequently, they are considered to have special magical powers and responsibilities. The Russian term “schupan” means “a gender transformed shaman”.

Daan van Kampenhout, author of several books on shamanism, describes Siberian shamanic costumes as being androgynous so that the wearer understands the totality of all human experience, through living as both a male and a female. He says:

“As part of the training of the shaman–to–be, he or she was expected to live for some time as a member of the opposite sex. During this period, the aspirant had to think, act and dress like a man if she was a woman, like a woman if he was a man. Often, a person who successfully passed this part of their shamanic examination would choose to continue living as a member of the other sex. In some parts of Siberia, this was even expected of all male shamans. Many traditional shamanic cultures offered their homosexual members the possibility of living with a partner: a gay or lesbian could become a shaman and change sex, afterwards being able to marry a person of the same biological sex. Usually such transformed shamans would be looked upon with awe, fear or suspicion. They were considered to have very strong and special magical powers and carried distinctive and important responsibilities, yet their shaman costumes were androgynous.”

I consider a Gender Shaman to be a Chacaruna (Bridge Person). A Chacaruna is a Quechuan* word that means one who crosses from one state of consciousness to others as well as helping others to connect to the spirit world. A Chacaruna is the connector/networker between multiple worlds. They must connect the worlds of:

1. Male and Female to include all gender variations
2. Gay and Straight to include all sexual orientations
3. Heaven and Earth
4. Ordinary Reality and Non-ordinary Reality
5. Life and Death
6. Past, Present, and Future Lives
7. The Body, Mind, and Heart
8. The Middle, Lower, and Upper Shamanic Worlds
9. The First, Second, Third, Fourth, and Fifth Dimensions

*Quechuan is the language of the Q’ero people that live in the high Andes of Peru. 500 years ago they were the spiritual advisers to the Inka.

Who better to be a Chacaruna than someone that has lived in multiple worlds in one lifetime and over multiple lifetimes? An individual that has non-conforming or alternative gender and sexual identities has learned to be a walker between the worlds. Not only have I lived a non-conforming life of multiple genders, multiple sexual orientations, and multiple spiritual perspectives in one lifetime, but I have done extensive research in gender and sexuality studies. These experiences have not only created a power of empathy I use in my healing sessions, but as a walker between worlds, I benefit from the ability to see from multiple perspectives. Like a remote viewer, I can see events and situations from my and others’ viewpoint simultaneously.

I guess it was no accident that hearing about Two Spirits led me to shamanism, which is a form of energy work that I deeply resonate with. Working in the field of gender shamanism allows me to combine my top three passions: past life therapy, shamanic energy medicine, and gender/sexuality studies. I have applied my shamanic and metaphysical background to develop new views about gender and sexual identity. I believe I am now ready to step into the “shoes” of a gender shaman.

In order to raise consciousness about the metaphysics of gender, I have created a presentation and all-day workshop called Gender Journey: Integrating the Divine Masculine and Feminine. One exercise I facilitate is called the Gender Energy Quotient, where we learn to read the percent of masculine and feminine energy in ourselves and others. Each time I have done a presentation, I know my audience never sees themselves or others the same way afterwards. I also employ guided meditations and other exercises to help individuals integrate their Divine Masculine and Feminine. If you are interested in hosting or attending a workshop, please contact me.